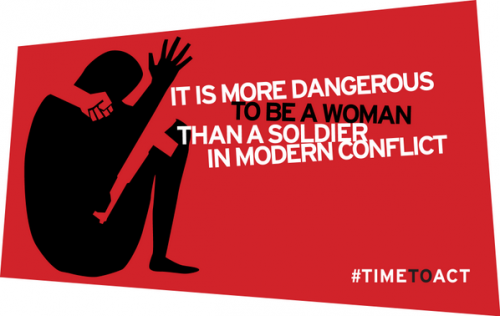 The heartless who initiated the heartbeat bills being passed across the United State have also worked hard to dehumanize women victims of sexual crimes in wars.  UN Resolution 2467 introduced in the Security Council on ending sexual violence in war has been passed, stripped of its most important parts. The original rationale was to protect victims of sexual war crimes, but, thanks to a threatened US veto, the final passed resolution is a shadow if its original intent. The entire health section, which included reproductive and sexual services, was stripped out because it implied right to abortion.  Language, such as “the establishment of a formal mechanism to monitor and report atrocities…”, was also removed. These disastrous changes of language occurred after afew days of stalemate between the US, China and Russia.

The most effective opponent of a resolution that would have added useful tools to protect women in war came from Trump’s ambassador, Jonathan Cohen. The Trump administration is attempting to wrest control from vulnerable women’s bodies in war and is instead waging war against women in the United Nations. The feeling of impunity of the most powerful state-members in the United Nations is notorious, and the United States is no exception. Although the United States has been involved in the building of international treaties against torture, violence, or discrimination, it has failed to fully ratify them. For instance, The International Covenant on Civil and Political Rights, ICCPR, which asserts fundamental political and civil rights, was never fully ratified. The ICCPR treaty comprises the formation of a group of experts for monitoring governments’ implementation of the treaty. Under a treaty entitled The Optional Protocol of the ICCPR, the Human Rights Committee may receive complaints from individuals. Individuals from the United States cannot have access to this body. Similarly, the United States is not fully bound to the Convention Against Torture and Other Cruel, Inhuman or Degrading Treatment of Punishment. Furthermore, the United States never ratified the Convention to Eliminate All Forms of Discrimination Against Women, CEDAW.

The debates concerning Resolution 2467 involved about 90 delegates, numerous dignitaries, two 2018 recipients of the Nobel Peace Prize, the Iraqi Yazidi Nadia Murad with her legal councilor, Amal Clooney, and the Congolese gynecologist Denis Mukwege. They were outraged and decried the international community’s failure to act. The Secretary-General of the United Nations António Guterres emphasized that despite two precedent resolutions and work on the ground, the situation has not improved: “Advocacy groups have demonstrated beyond a doubt that sexual violence is deliberately used as a tactic of war, to terrorize people, dehumanize communities and destabilize societies, so that they struggle to recover for years or even decades.” Pramila Patten, the Secretary-General’s Special Representative on Sexual Violence in Conflict had these strong words: “Wars are still being fought on and over the bodies of women and girls.” Everyone hoped that the resolution would bring some momentum to actions to stop this cycle of violence and give victims a way to become again full human beings.

Although the international community seemed to have realized the gravity of the situation, the lack of protection and help for the victims and the lack of implementation of accountability mechanisms have remained the main issue. It seemed that the issue was doomed from the get-go. This resolution will become yet another political tool in words and not deeds, and yet another frustratingly futile attempt at rectifying a clear injustice.

At this time of mounting far right intolerance, there is a discrepancy between the political reality of the lives of these women and the level of actions by the leaders of the most economically powerful and largest countries.

That the heartless were at war with justice was anticipated by many in the field. Celine Bardet, founder of “We are weapons of war”, didn’t make the trip to New York. She declared that what happened to the resolution reflects the overall US policy. Since assuming office, Trump has imposed the strongest version ever implemented of the Global Gag Rule, with its dreadful consequences for the most precarious women of the global South. Meanwhile, the ongoing battle against women’s health, reproductive and sexual health in the United States has reached new levels of cruelty.

Some expressed outrage, for example the UN French Ambassador: “It is intolerable and incomprehensible that the Security Council is incapable of acknowledging that women and girls who suffered from sexual violence in conflict — and who obviously didn’t choose to become pregnant — should have the right to terminate their pregnancy.”

Noting that today victims have no access to medical services, Celine Bardet argued that nobody should have voted for this resolution since it was stripped of its most important content. Bardet believes money should be directed to victims on the ground; helping victims to reclaim their dignity is the only way to make a difference, as survivors, unlike the international political community, will not give up.

The lack of will to protect women victims of sexual war crimes is a political issue ingrained in the heart of the patriarchal capitalist/neoliberal system.  Wars open up a cornucopia of markets, such as the security market, the rebuilding market, “the global smart weapons” market; the list goes on. Control over women’s reproductive bodies must be understood as the elimination of women’s political bodies. When the global gag rule makes women’s lives precarious, so does a UN resolution that has no ability to protect women from sexual war crimes. These political instruments render women’s racialized and gendered bodies invisible, and this is what mainstream feminism sometimes has difficulty understanding.

While these heartless policies are currently being enacted against women, on the ground other voices are surfacing to uphold women’s rights and the right to live on a planet without fear of climate catastrophes and war. These voices are rising up in the younger generation in the U.S. Congress, in the current run up to the European Commission election, in the fringe parties in India, in the counter protests in Venezuela, and so on. As, worldwide, far right voices are trending, this is the time to keep our ears to the ground.